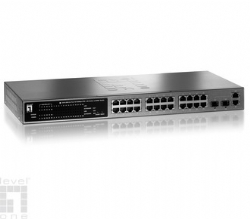 This switch incorporates QoS, Port Mirroring and VLAN features making it one of the most useful switches in its class providing adequate support for networks on a cost-effective scale. The Qos (Quality of Service) provides four internal queues to support four different classifications of traffic. High priority packet streams have now priority over less sensitive traffic at full wire speed.Port Mirroring helps track network errors or abnormal packet transmission without interrupting the flow of data. It allows traffic to be monitored by a single port that is defined as a mirror captures port.

The VLAN feature offers the benefits of both security and performance. VLAN is used to isolate traffic between different users providing better security. Limiting the broadcast traffic to within the same VLAN broadcast domain also enhances performance.User authentication for each network access attempt allows for better access control. Port security features allow network managers to limit the number of MAC addresses per port in order to control the number of each station for each port. Static MAC addresses allow only registered machines to connect to the switch. Both these features establish an access mechanism based on user and machine identities as well as give control over the number of access stations.

The comprehensive LED indicators assist network managers in monitoring the switch as well as the traffic flowing through it at one glance at the LED panel located on the front of the switch.